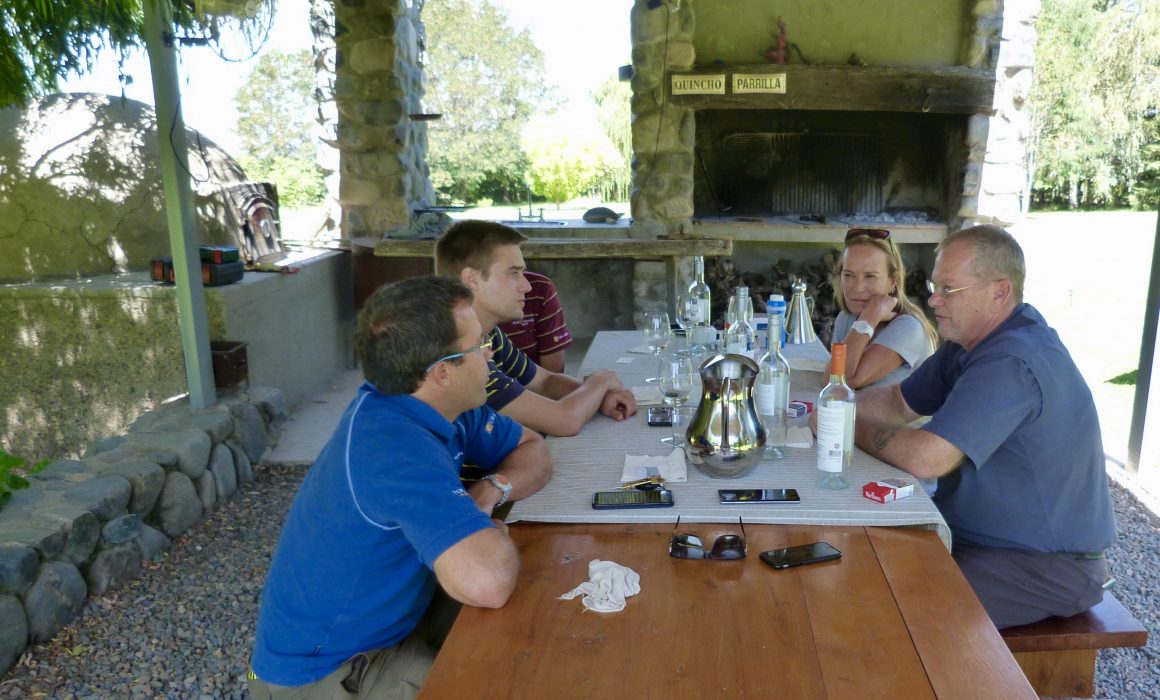 When I was living in Mexico years ago, there were two historians that were battling over very different versions of Mexico’s history. One, Enrique Krauz, took the position that Mexico’s history was best seen through the notion of “mestizaje,” or the fusion of Spanish blood with Indigenous peoples – a blending of races and civilizations. Another historian, Enrique Florescano, suggested that this made the Conquest seem as if it were a sudden, permanent and total accomplishment, and that it ignored the local and regional resistance to domination that even now, continued to happen. Florescano is what is known as a micro-historian, and he prefers to dig down into the local stories, even in the face of large-scale forces being at work – an approach I have come to admire. I came to call this argument of the macro versus the micro, the Battle of the Two Enriques. 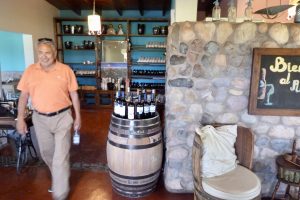 I found myself thinking of these micro-histories, during my visit to Mendoza -starting with my friend Pedro Quiroga (https://peterwinetours.com), who was driving me around to bodegas. A man born in the United States to parents from Mendoza, who
worked in the mining industry, he is now much happier working in tourism and has seen much of the Mendoza wine industry in its growth period. He is also an incredible source of knowledge and information.

Our visits to bodegas in the Valle del Uco included some of these “large force” vineyards and bodegas; examples of how international investment has come to Argentina. There were other moments though, when you aren’t just doing the tastings, or “desgustaciones” as they are called here, when you get to see the passion and how individuals are passionate about what they do. Tasting with the wine maker, Carlos, at Gimenez Riili led to a great conversation about the battle over the “old way” of winemaking, which emphasizes the winemaker, versus the “new way,” which emphasizes terroir, climate, soil, etc. He finds 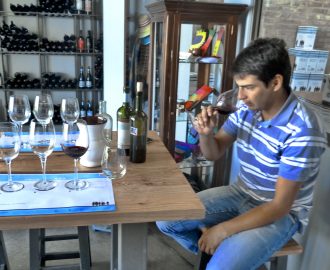 himself trying find a middle ground, where the winemaker is not devalued in this new system, while acknowledging, what for Argentina, is a new focus on terroir and a sense of place, and in addition to the wines he makes for Gimenez Riili, he shares an amazing Petit Verdot on his own label, to show me the style he is talking about.

Lastly, there was the stop at Bodega El Azul, a boutique winery that goes back over 60 years with local grape and peach production. The name, El Azul, comes from the story of the father, Francisco Hinojosa, having to split up the land among his children, and each of them 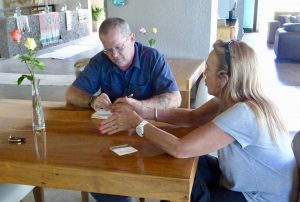 choosing a card of a different color. With each color, came a plot of land, a tractor, and other supplies, all marked with that color. The son of that daughter, Ezequiel, now runs El Azul, the bodega, a restaurant and a hotel. Next, you find yourself sitting at a table, drinking a typically enjoyable Mendoza Malbec and a lovely Sauvignon Blanc, out in the back of the hotel near the parrilla, talking about the state of wine in Mendoza and in Argentina. 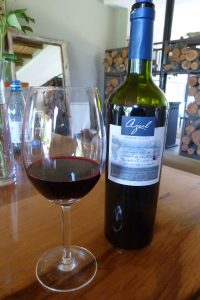 These individual stories of wine growers and wine makers are undoubtedly set in the context of bigger forces. But wine seems to lend itself to the exchanging of these local, micro-histories in a unique way, and seems to embody the conviviality you find in virtually any wine region. 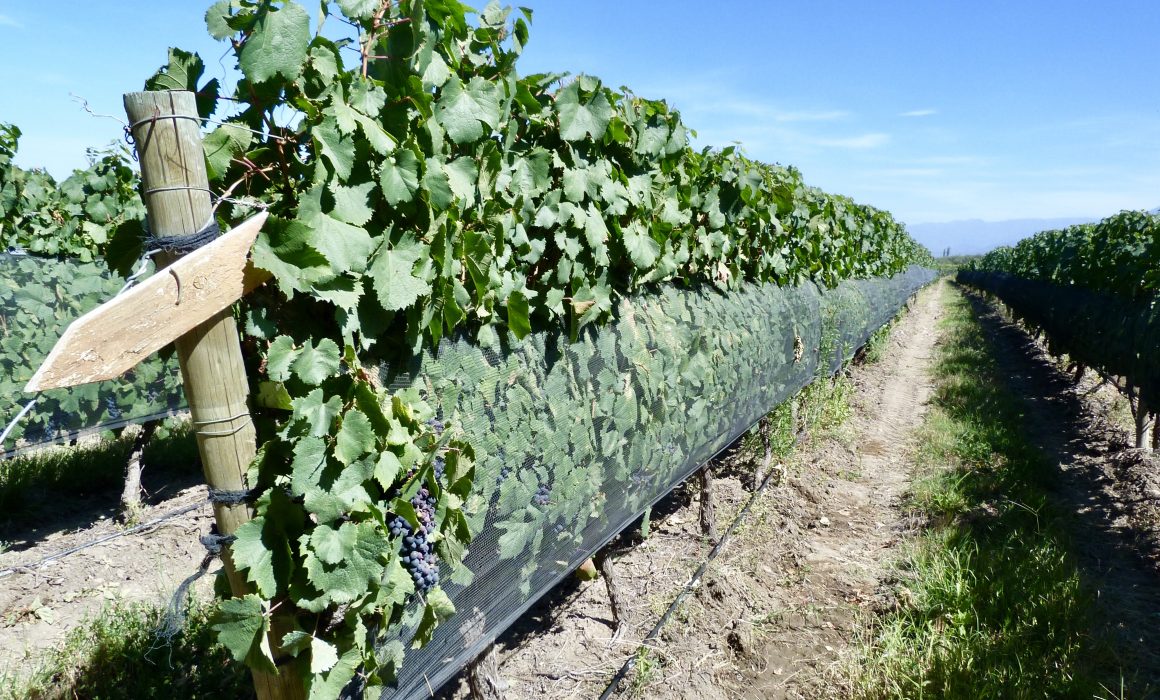 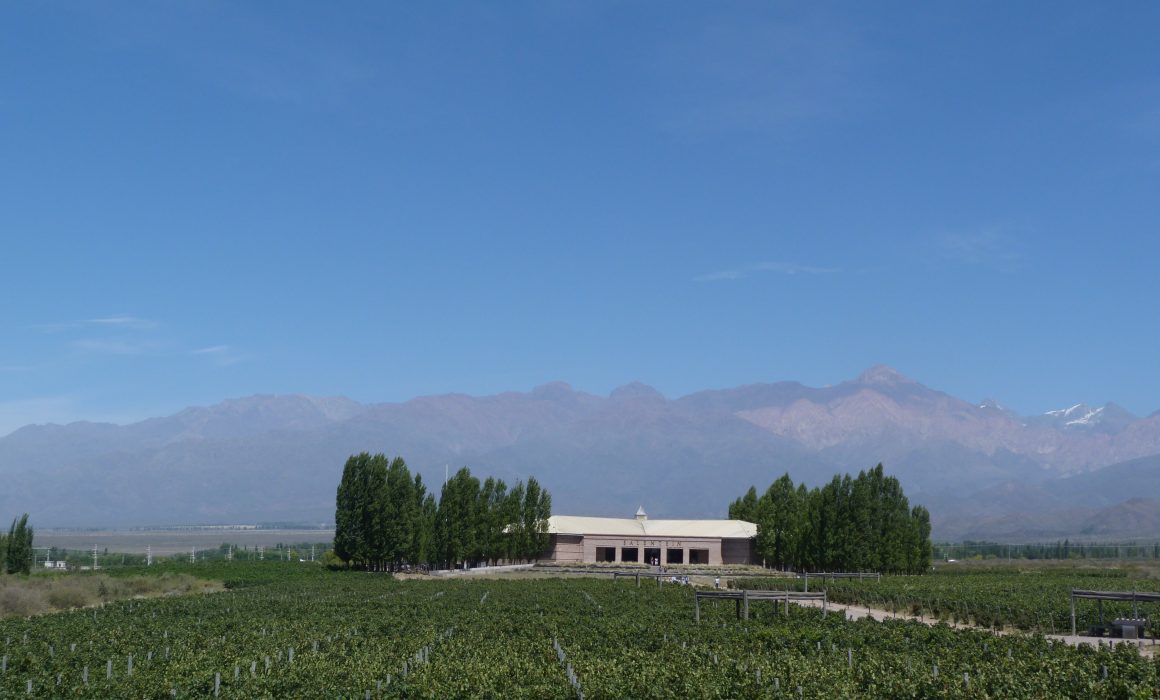 There has been an incredible amount of foreign investment in Mendoza’s Valle de Uco, about 100 kilometers south of Mendoza, Argentina. It is a recent creation of a wine tourism region out of sand and rock, and a great example of the different forms that vineyards and wine-making can take in the present day. Many would refer to this as the recent impact of globalization, but globalization is actually not a recent phenomenon. For it to happen, it first took a sense of place to release the forces of globalization, and that was in the form of permanent settlements during the Neolithic Period (or New Stone Age), a mere 11,500 years ago, or about 9,500 BCE, give or take. 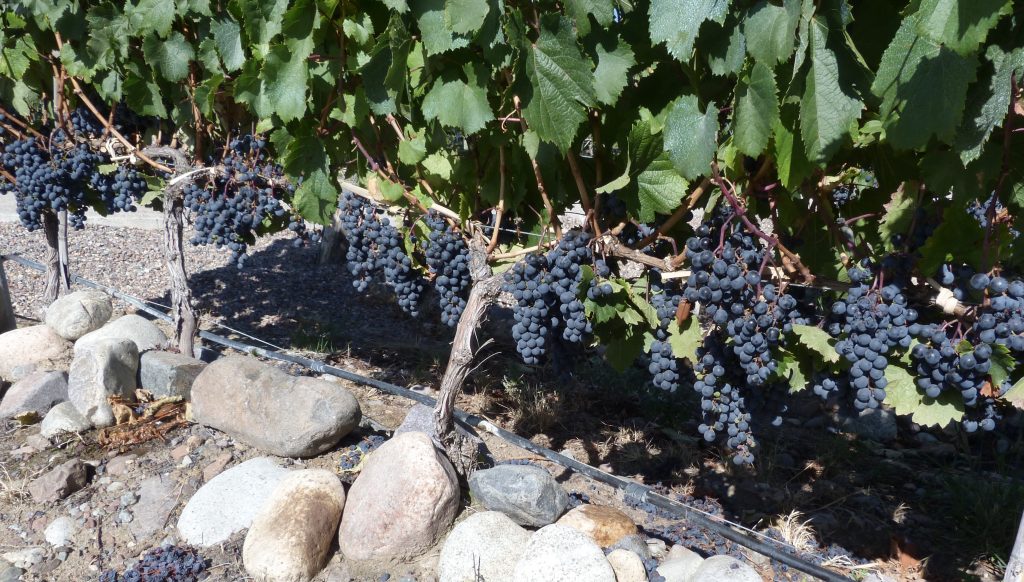 The rock and sandy soil of Valle del Uco

The Neolithic was important to humans, because it was when we started to domesticate animals and crops, and humans started to trend away from nomadism and into permanent settlements. This was important to grapes because not only could you grow them in a domesticated fashion in one place, it also took that same permanent location in which to ferment them – hard to do when you are nomadic and moving a lot. An additional bonus was that when you were permanently settled, you were much easier to find – so when you had surpluses (which you could now store more easily) you could also trade what you had. Grapes and wine benefitted from all of those conditions. 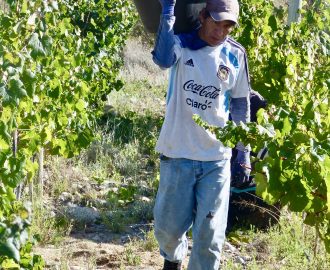 Mendoza shows these waves of “globalization,” as they relate to wine. On the one hand you have early permanent indigenous settlements fermenting grains in regions of Mendoza, or in proximity to it. You then have the introductions grapes during the colonial period, both as a part of conquest and for religious regions – the latter for communion wine, about 450 years ago. Later, a strong influence of immigrants from wine producing countries, especially Italy and Spain, from the mid 1800s to the early 1900s. And now, given the economy you are seeing a lot of investment from abroad.

The Vines, in the Valle de Uco, as well as surrounding vineyards, are indicative of the latest form of globalization. The success of the marketing of Argentina’s Malbec, and cheap land, has attracted foreign investors. The Vines, attracts investors who can buy a certain amount of hectares from which to make their wines, and the services provided range from the entire vineyard to bottle process, to owners who establish bodegas who staff it for themselves. Most of the region’s vineyards, The Vines and other local vineyards, are young – all planted in the last 15 years. Malbec, Cabernet Sauvignon, Merlot, Tempranillo, and some whites in the form of Sémillon, as well as some Chardonnay and Torrontés. What cannot be grown there are often brought in from other areas of Mendoza for blending. 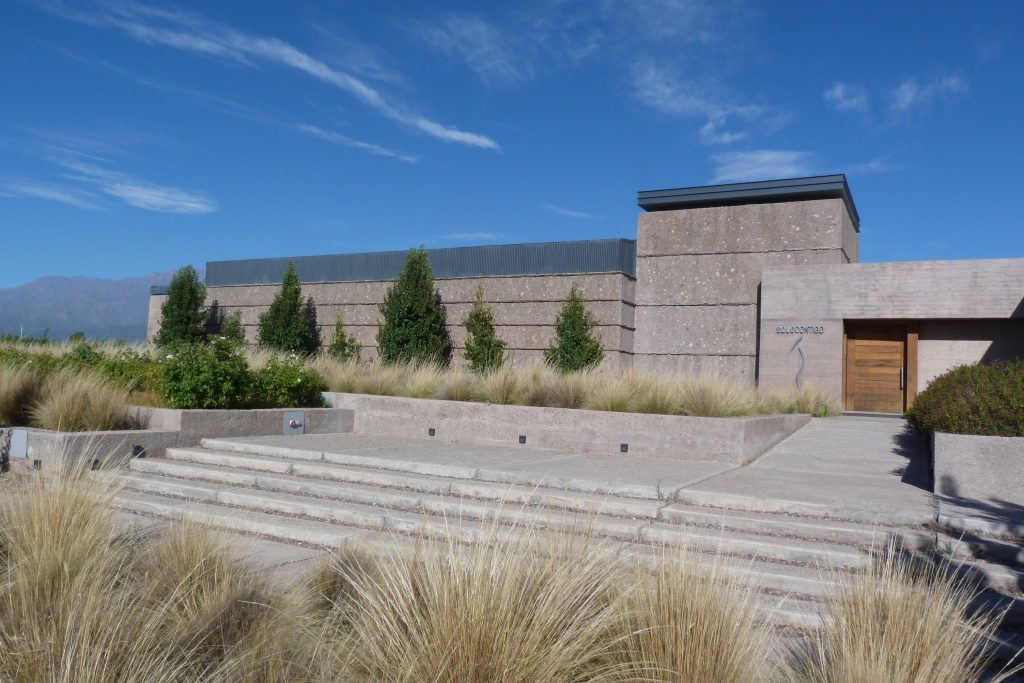 Bodega Solo Contigo, in The Vines 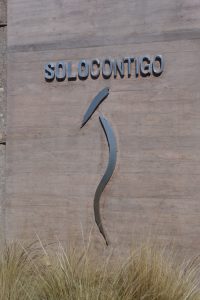 Many of the wines are excellent, and production levels range from 50 thousand liters to 7 million (or probably more), depending on the bodega, the owners and the wine-making philosophy. It is a palate-bending region in which to taste, based on wines made from young vines, in a new and interesting region. And the side conversations on whether or not this contemporary from of globalization is good, bad, or even matters, is almost as varied as the wine itself. 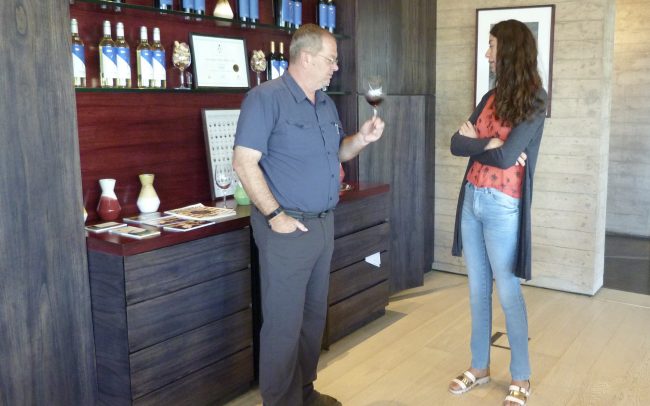 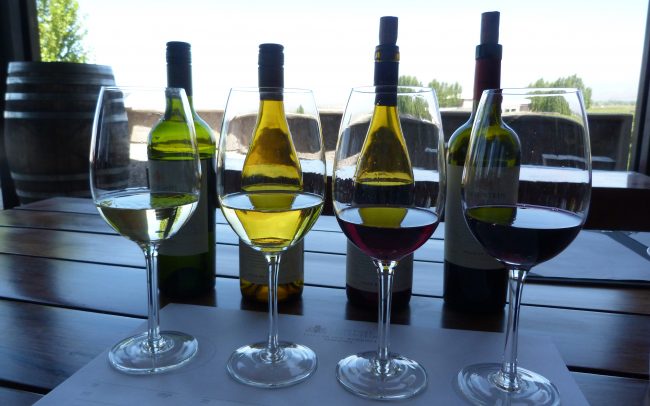 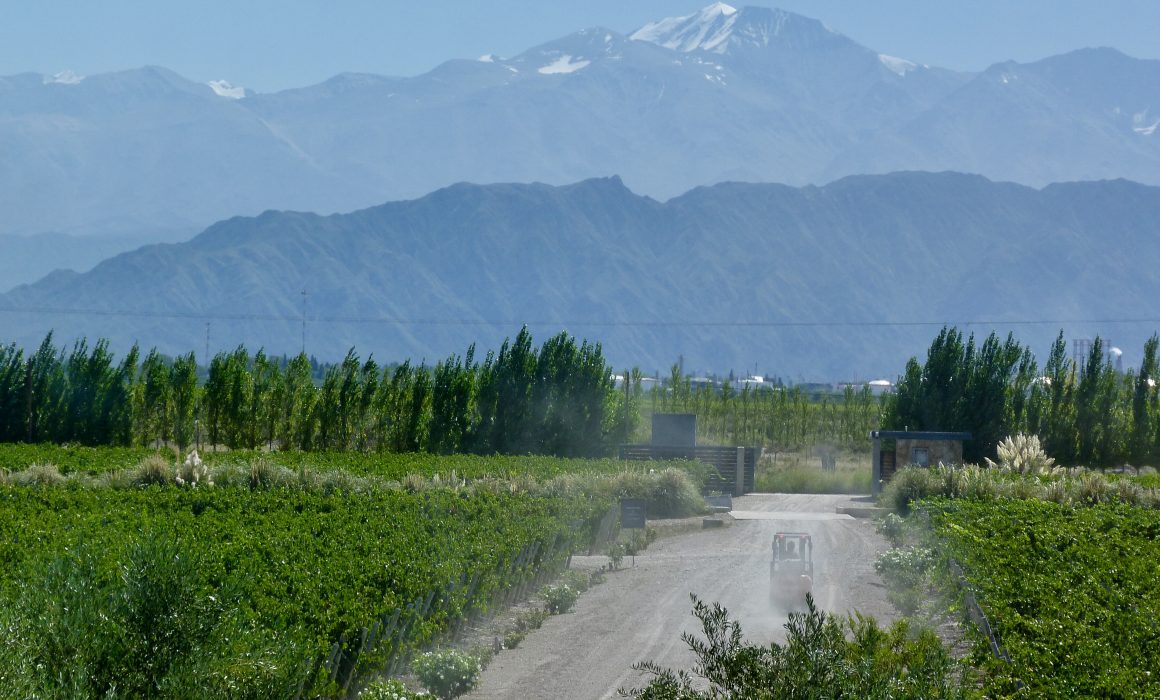 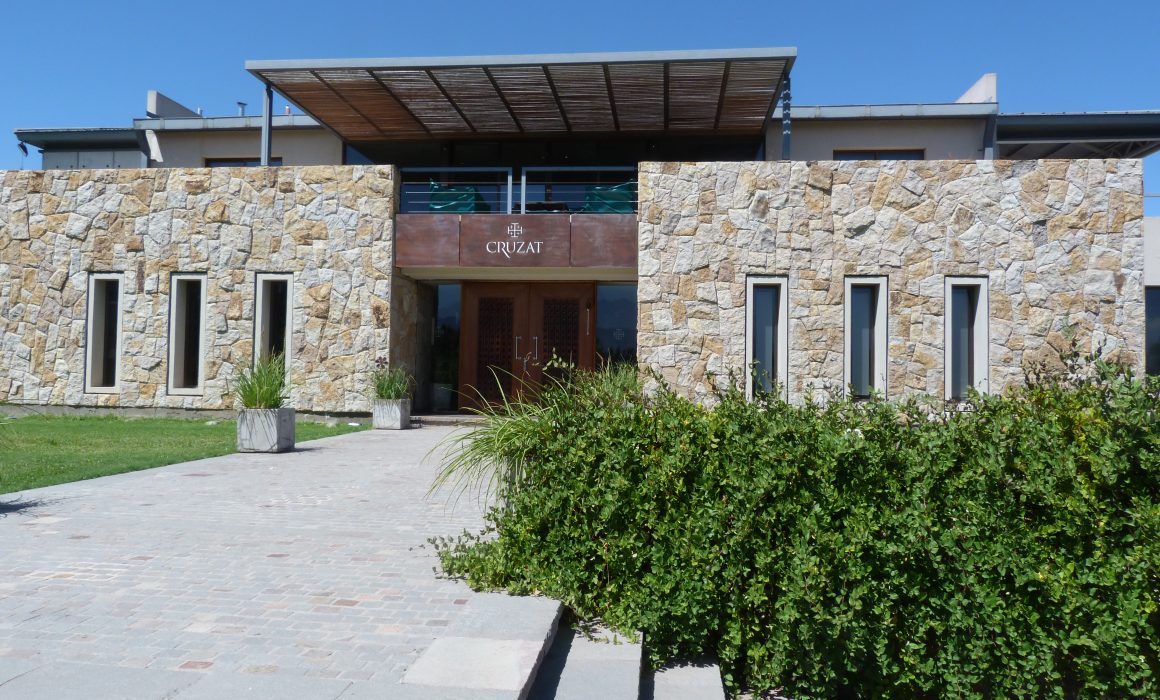 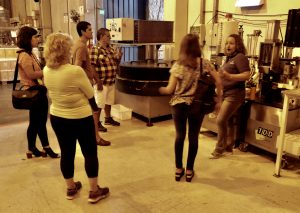 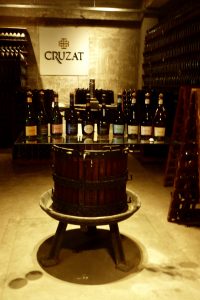 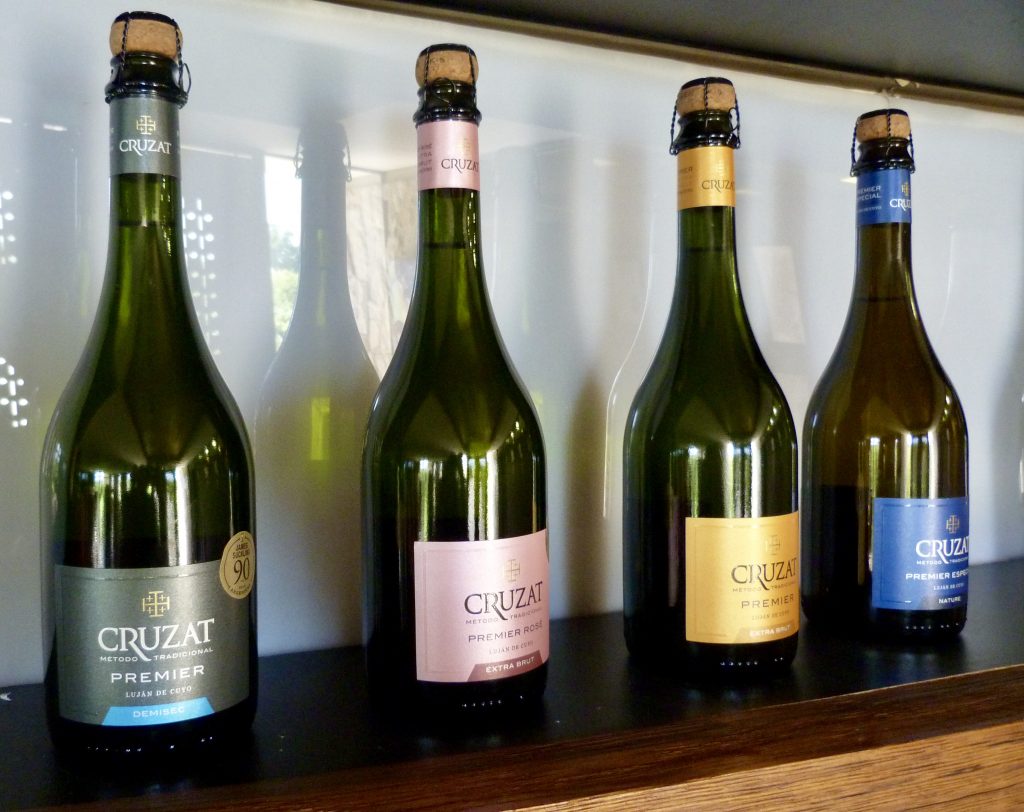 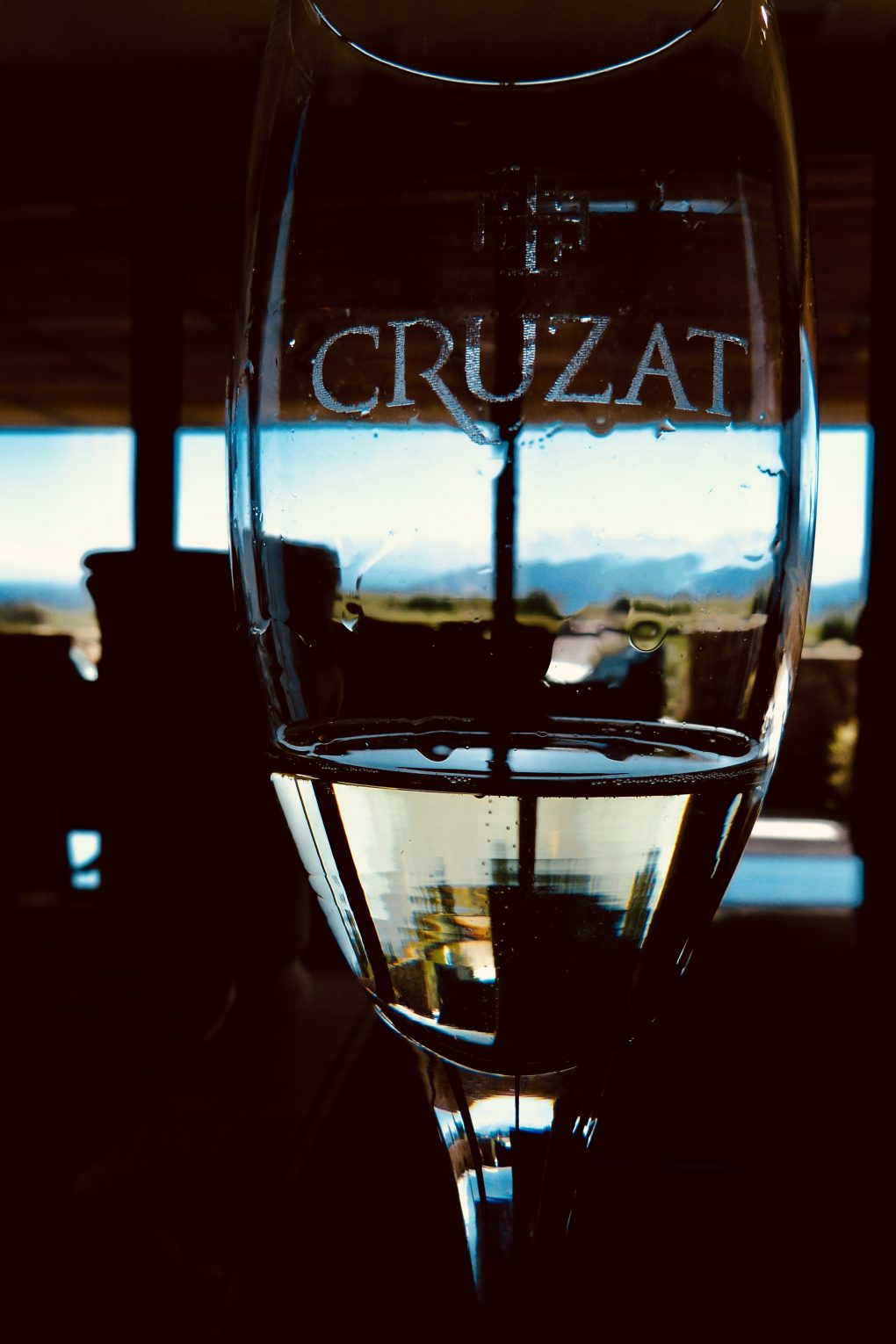