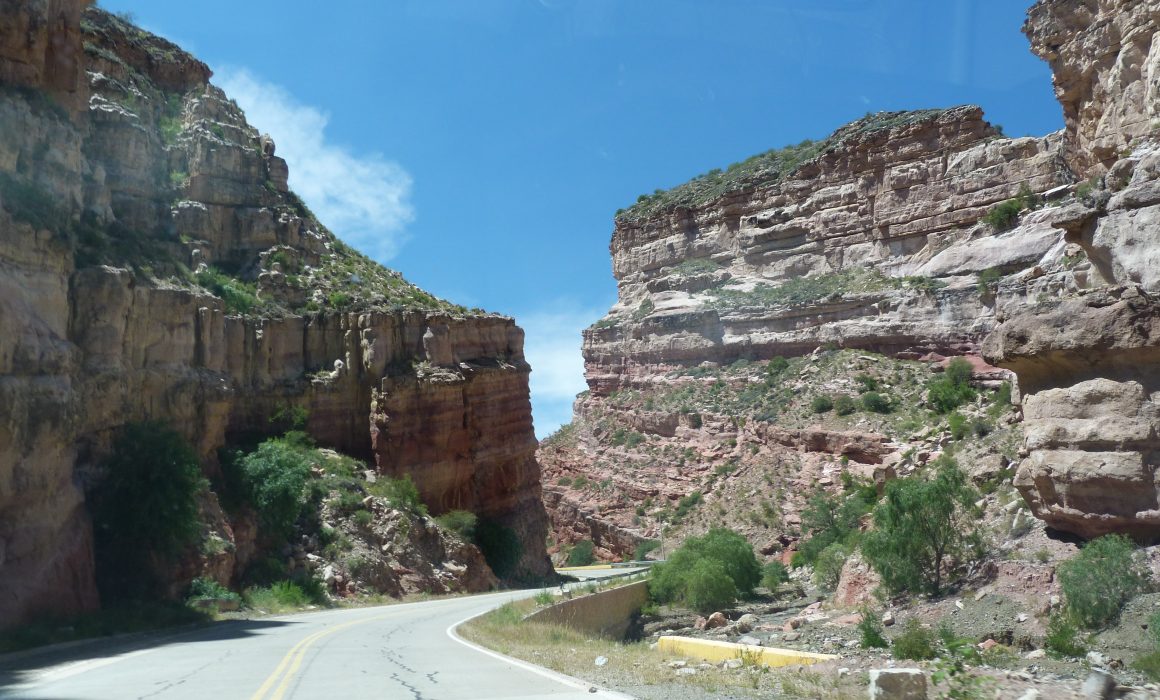 The Valle Cinti is largely inhospitable to humans and grapes, unless one or both of them manages to establish a foothold on one of the precious few hectares along the banks of the rivers that flow along the 85 kilometer canyon. It is a beautiful, if stark, valley – a rocky floor with cacti and scrub brush, surrounded on one side with a stunningly red mountain range and on the other with one that is a drab grey-brown. My sense from my visit to Cepa de Oro was that perhaps humans help grapes survive there, because the grapes in turn make the stay a bit more pleasurable. 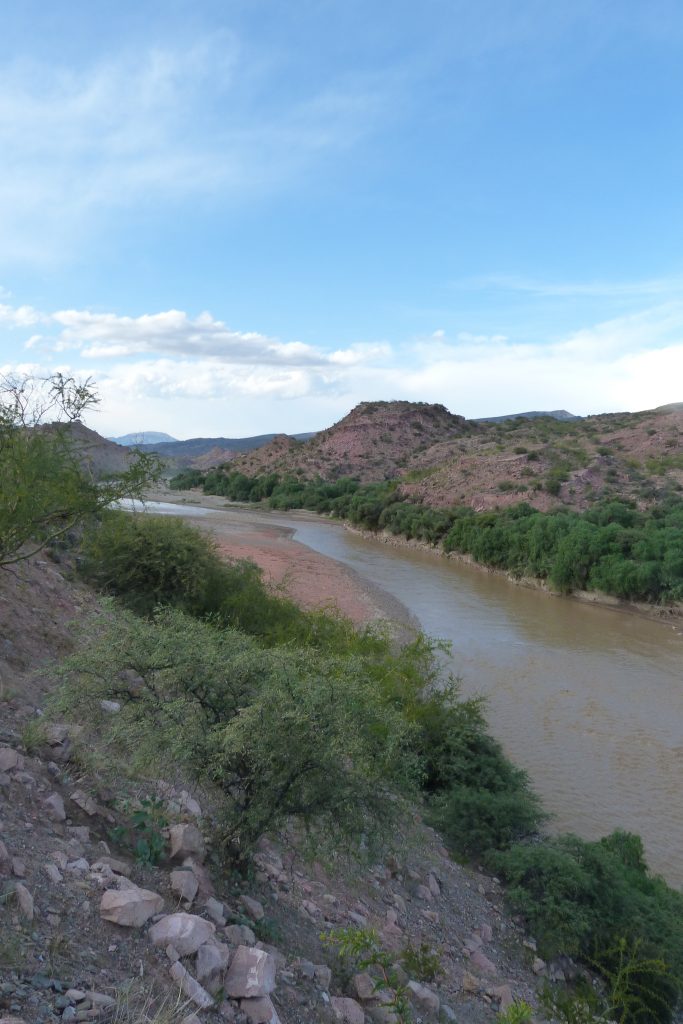 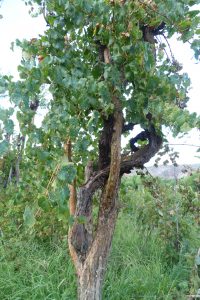 A tree, supporting a 100-year-old grapevine

The Spaniards, and Jesuits in particular, brought grapes into the Cinti Valley almost four hundred years ago, even though the indigenous presence itself goes back thousands of years, as documented by Riveras Casanovas in 2004. Most of the grapes would have been planted as seeds, and not cuttings, and would be brought down to the Cinti Valley from places further north, such as Potosí and Sucre, and they would require innovative methods to keep the sun and hail off of them. As I walked the vineyards with don Jaime Rivera, from Cepa de Oro, he shows me some of the strategies used – trees with umbrella-like shapes that give shade and deflect the hail. Plantings near rivers along what must be only a few hundred hectares of fertile soil in the 85 kilometer valley to protect against drought in the land that only gets about 3 months of rain a year. 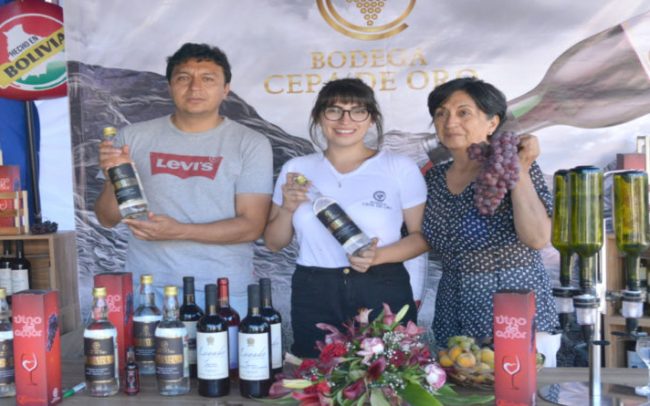 Jaime Rivera Andres, on the left. Image taken from onlime, as he was holding his daughter most of the time!

Jaime Rivera named Cepa de Oro (“cepa” means vine, or the trunk of the grape) when he saw the sun reflecting off of the golden Moscat de Alexandria grapes, from which he would make white wine, and distill Singani, but now his son, Jaime Andres Rivera, is the fourth generation to make wine here. The latter has a particular love for the regional varietal La Vischoqueña that comes from a nearby town, as well as La Misionera or Criolla Negra, both of which are used for red wines. His father has a love for the unusual grapes that are not found elsewhere, or which are very rare, such as a varietal they call Borgoña which I’ve not seen elsewhere, and a black grape with a dark red juice to it called Lagrimas de Cristo (Tears of Christ). 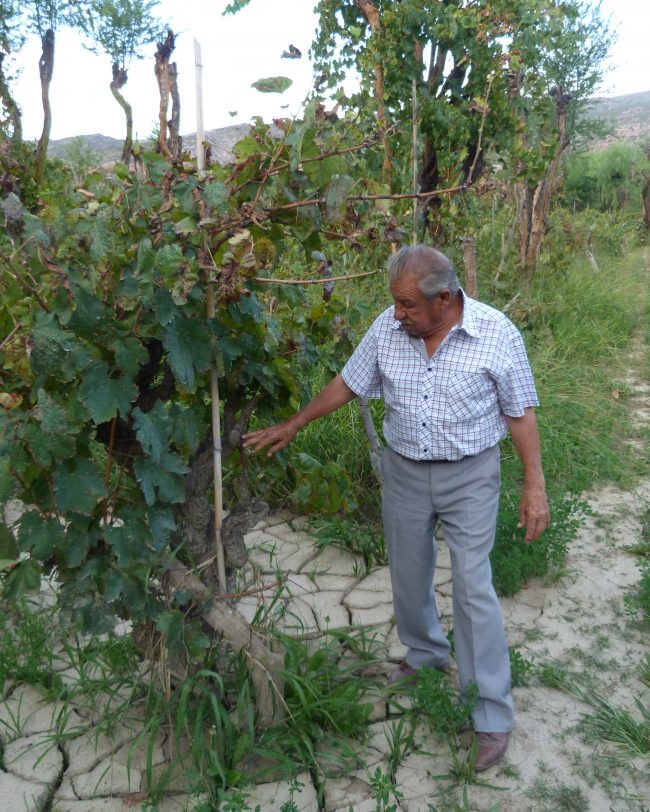 With don Jaime Rivera in the vineyard. Note the flooding from the river.

My visit with them was not the everyday “desgustación, or tasting, because it took place at the huge birthday party thrown for Jaime Andres Rivera’s one-year-old daughter. Bottles were opened in between clowns and cakes and a meal, but they were amazing. A Vischoquena rose, as well as bottles of red Vischoquena and a rare bottle of Borgoña – all amazing and passionately discussed. The future for Cepa de Oro seems to be a focus of these primary local varietals, along with some Merlot, Cabernet Sauvignon, and of course, the pride of the region, some incredible Singani. 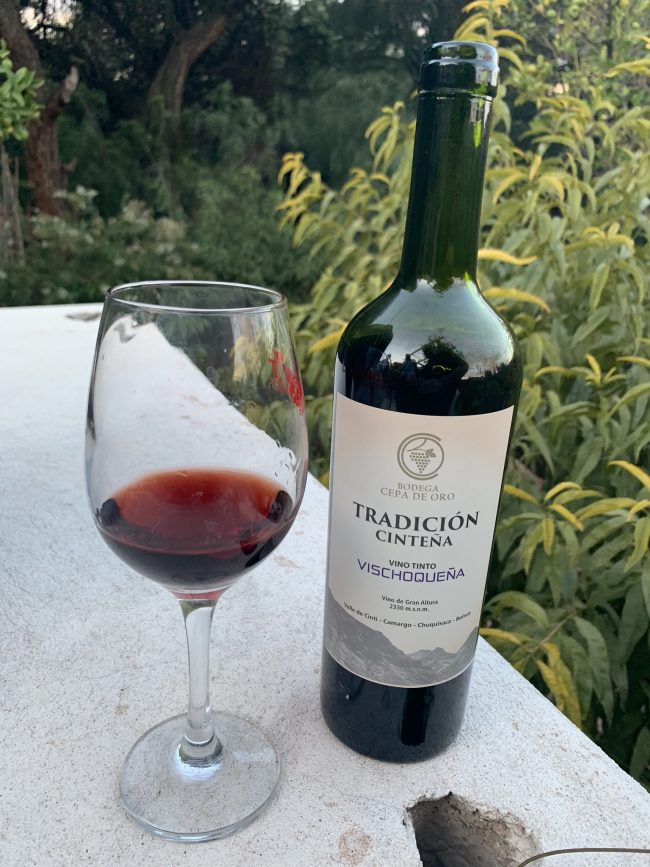 An amazing bottle of La Vischoqueña